Places to go, people to see

Followers or how many people like me... its zero aint it? :(

Seems I have been snowed under with illness and the evils of higher education again! Watch this space very soon ill be posting some nice pictures.
Posted by Gluefingers at 3:53 PM No comments:

Chemistry - or why I have been lax with my blog

though I did get a nice parcel from ramshackle games today so I will soon have another interesting character!
Posted by Gluefingers at 2:00 AM No comments:

Well after doing some inital designs and even starting work on a wheelhouse I have desided not to do a Wren Class launch. This is due to the fact that it would look like one of those ridiculous Epic level 40k game that GW is throwing around now.

So I have decided to go a little smaller and look at something like a small gunship. A bonus of this is that I do have some of the smaller parts alreday worked out - Ie MSC Feild Versions and ships wheel as well. I suppose its all a learning experince
Posted by Gluefingers at 5:41 PM No comments: 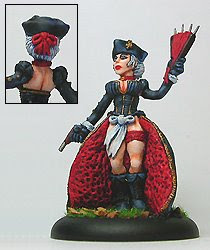 Helga Von Zepplin the miniature, I think I have found her. Opinions? Give us some feedback chaps! May change her hat not sure though. The figure is from laughing monk which I think is a part of Shadowforge.
Posted by Gluefingers at 5:38 PM 2 comments: 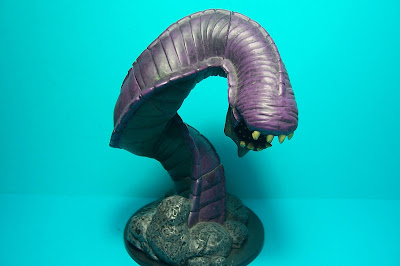 Well I have some nasty Venusian Worms - well they will be only I'm puzzled what colour should they be? Not purple I will not accept purple as a colour!!! as these are D&D minis and are titled purple worms. Same bases as the British as well, that should give you a little guide also will give their mouths a healthy does of water effects to make some drool happening.
Posted by Gluefingers at 10:15 PM No comments:

Well here are the first few snaps of my Brits, I will have to tweak the photo-box a bit I think But I am satisfied especially with the figure of the young Queen. 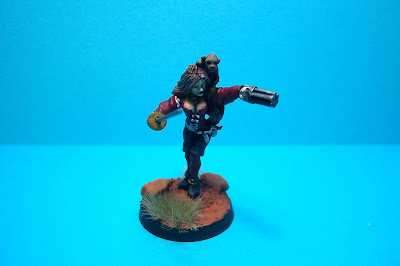 Onwards and here she is again pictured with her bodyguard made up of her fathers regiment the KRRC (Kings Royal Rifle Corps). 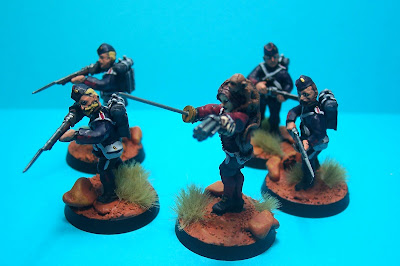 Commander of the HMS Juipiter (A wren class from the HMS Victory) Captain Donaldson and his crew. 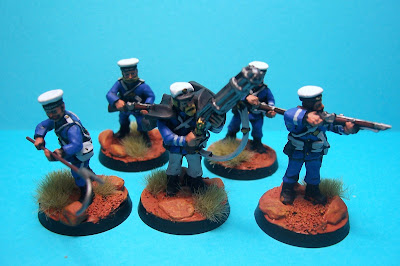 Finally there is Major Templeworth and his Colonial Guard.

Frankly I am hoping this post works if so I have increased my Blogger skills quite well!

Posted by Gluefingers at 9:38 PM 2 comments:

"A launch that is capable and strong enough to be its own vessel."

Richard Cosgrieve: Yes that is what I intended for the Wren class vessels. As the Victory (her home ship ED.) would be operating far from safe aether, it was only natural that the launchs be self sufficient and independent.
Janes Aeronefs: Was this also a reason of mounting her with similar weapons to the HMS Victory?
Richard Cosgrieve: Oh yes integral. It was in this that we could standardise the ammunition and even the Field MSCs carry the same ammunition of the infantry so that ship (HMS Victory) stores would not be a collection of ammunition but a stock from which many military assets could call upon.
Janes Aeronefs: The carrying capacity is a new design something you have taken from military advisement.
Richard Cosgrieve: Oh yes, furthermore this will be a precedent setting design. Ships whether they be launchs or heavy dread naughts need to posses all abilities so that they can maximise their usefulness. Thankful Major Rippendorf Collins has been immensely helpful even organising small forays with the launch to test her abilities in presenting troops quickly to a battlefield. Currently it is 2 minutes flat, that a commander can get several platoons into the Field, not including travel time from the home ship of course.
Janes Aeronefs: Outstanding performance figures there, a task that could take several hours if not days reduced to a 2 minute activity. The Wrens armour is quite substantial for a ship of her size does this impede speed or performance.
Richard Cosgrieve: No not really, in essence it allows the ship to get a lot more done and prevents a commander losing important assets. The armour is a strong and easily repaired item - plates can be removed to facilitate repair with the HMS Victory carrying many workshops and stores it is easily to get a heavily damaged Wren Aeronef back into battle.
Janes Aeronefs: could you inform our readers on the capsule system that the wren posesses.
Richard Cosgrieve: Certainly, this is one of the more exciting elements yet. With a small in-dock modification the ship can be switched from military transport to cargo and to a gunboat system. In this it maximises its potential worth and allows for limitless customisation of a fleet within a fleet.
Janes Aeronefs: Thankyou for your time sire goodluck with future designs
Richard Cosgrieve: Thankyou it has been a pleasure